Our backyard looks and sounds a little different than it has in a long time.

We recently bid a fond farewell to our little backyard garden pond. She served us well all these years. It was time to let her go, and allow others to embrace her captivating charm.

I didn’t relish removing the little pond and all its accessories. The artificial pond brought us many genuine joys, far beyond any expectations we could have imagined.

When I retired as elementary principal in 1999, my faithful staff, amiable students and supportive parents presented me with a very special gift. They gave me a hand-hewn birdbath and a gift certificate for a garden pond, something I had wanted for a long time.

I brought the weighty birdbath home and plopped it where the sidewalk curves to the front porch. Surrounded by luscious bubblegum petunias, it enticed many a bird to sip and bathe in the summer sunshine.

I located the pond just steps away from our back porch. It was also easily visible from the windows at the rear of our home.

I’ve had two different ponds over the years. The first was a rubber lining placed in a shallow hole that I had dug out. I added a miniature waterfall constructed out of an assortment of rocks I collected from farm fields and local creeks.

I added goldfish, oxygenating plants, water lilies, snails and non-toxic chemicals to kill the algae and keep the water as clean as possible. Of course, I had to feed the fish and regularly clean the pond pump filters.

Unfortunately, destructive varmints also were drawn to the water feature. Several years ago, I awoke to find that the pond had been nearly drained.

I discovered that some ground moles had created shortcuts to quench their thirst. To prevent a reoccurrence, I switched to a hard plastic pond. In the end, it turned out to be a better option for everybody, pond critters included. 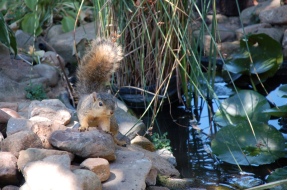 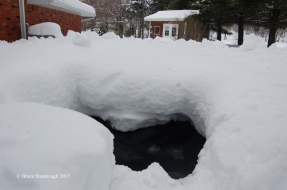 Beauty and the beast. © Bruce Stambaugh 2015 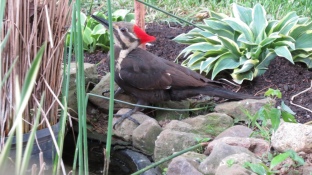 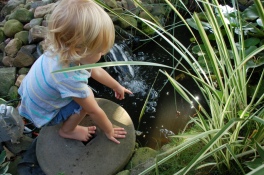 The waterfalls provided practical and esthetic pleasures. The birds loved it, bathing and drinking the refreshing water. The sound of water falling mesmerized anyone who graced our porch.

I enjoyed watching American Goldfinches bringing young to the pond for the first time. I added a heater to keep the falls going in the wintertime. A variety of birds took advantage of the much-needed water when their normal sources froze.

Birds weren’t the only animals attracted to the little pond. Over the years, raccoons, garter snakes, groundhogs, squirrels and even deer came to the pond.

The grandchildren loved the pond, too. They couldn’t wait to feed the fish and count the frogs hiding among the lily pads and their pure white blossoms each time the grandkids visited. My wife and I will always cherish those fine memories.

As much as we loved the pond and its amenities, we needed to give it up. Given our situation, we simply couldn’t maintain the pond properly. A friend’s family is already enjoying its alluring magical sounds. It’s nice to know that another generation will continue the gratification that we received from the little water feature.

To keep a water source for the animals and birds, I relocated the sandstone birdbath from the front to the back and added a couple of others to keep it company. We transplanted hostas and placed several of the rocks leftover from the falls for some natural texture.

The birds have already discovered the water. I only hope the snakes and groundhogs don’t find it as desirable.

Well it happened. I finally had to remove the giant green frogs from my little garden pond. The reason? I found another dead songbird by the pond. The perpetrator left the evidence in plain sight and never bothered to leave the scene.

After what had happened this summer, I had no choice in the matter.

In July amid the hottest, driest weather of the summer, the grandchildren were here visiting from Virginia. They always ask to feed the goldfish in our garden pond.

As we approached the pond with fish food in hand, I spotted something rather suspicious. The largest of the green frogs that inhabit our pond was resting atop a balled up, wet and obviously dead House Finch on the rock pile near the little waterfalls.

The frog must have felt guilty because it jumped into the pond as soon as it spotted us. I let the kids feed the always-hungry fish while I investigated the crime scene. Of course, Davis, the inquisitive six-year old, wanted to see what I was looking at, too. 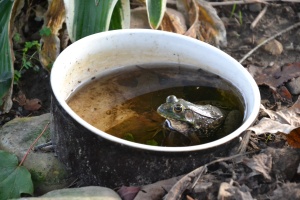 Once I realized we had a killer frog on our hands, I diverted the kids’ attention by playing ball in the side yard. When I went to get the dead bird, it was gone. Had the frog come back for its dinner?

A few weeks later, I found a second House Finch floating in the pond. I contacted a naturalist friend about my discovery. She had heard of bullfrogs catching birds, but not green frogs. Either way, her conclusion was the same as mine. The big green frog was trouble.

Since the grandkids loved looking for the frogs as much as they did feeding the fish, I hated to transplant the amphibian. I decided to keep a close eye out for more evidence. I found it on September 25.

This time I discovered an American Goldfinch left on the sandstone grindstone where the grandkids stand to feed the fish. Just like the others, the Goldfinch had clearly been drowned with evidence of attempts to swallow it. Just inches away, minding its own business, the green frog sat unsympathetically on a soft patch of grass. At least I thought it was a green frog.

That was the last straw. I watched for an opportunity to catch the two largest green frogs and relocate them to a neighbor’s farm pond. I caught the docile female right away. The bigger male was a bit trickier. You know how men are.

Finally, I saw my opportunity. The wily frog was hiding beneath the floppy leaves of one of the hosta plants that border the pond. In a sneak attack, I captured the frog and quickly placed it in the minnow bucket with the other frog. 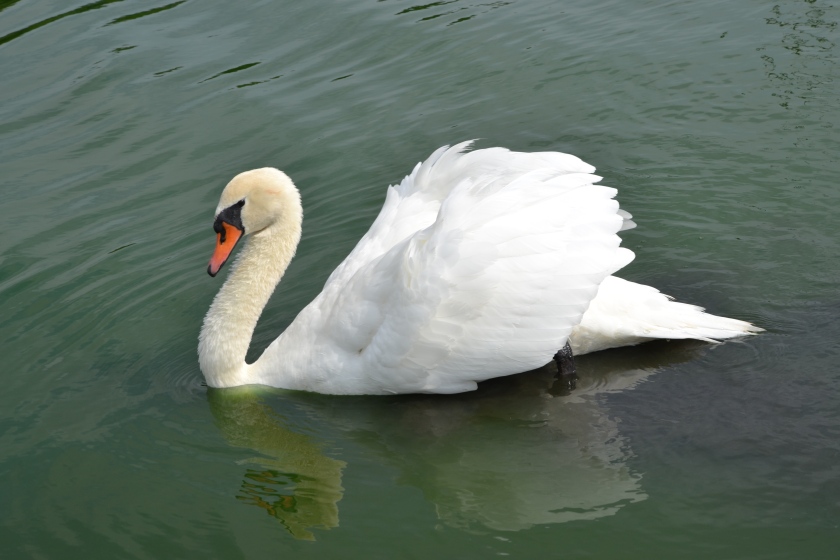 As I prepared to release the pair of frogs at my neighbor’s pond, a rather large Mute Swan swam straight for me, hissing all the way. The larger of the two frogs was more than happy to hide in shallow water. The female was content to enjoy the grassy shoreline.

I didn’t bother to say my farewells. I was patient catching the frogs. The agitated swan was another story. I didn’t want to painfully pay for my efforts with a nip by the aggressive and territorial waterfowl.

If this greedy green frog attempts to swallow one of these big birds, I think it will be in for an enormous surprise. And I think I’ll write a book.

Upon further investigation, others more knowledgable on frogs than me identified the culprit that I had photographed as a bullfrog, not a green frog. My mystery was solved, and my frog facts greatly improved. The book’s plot just took a turn.

I have greatly enjoyed the little garden pond that students and staff gave me when I retired as their elementary principal 13 years ago. It was fun building the pond and the little waterfall that gurgles night and day.

The pond, visible from all rear windows and our open back porch, has multiple benefits. The mini falls’ mesmerizing tinkling of water on water lulls me to sleep on pleasant nights. An assortment of wildlife has ventured to the pond, including deer and a Great Blue Heron.

Goldfish, snails and aqua plants help keep the pond’s water in proper equilibrium. A family of green frogs just showed up on their own. They have been a welcome addition, until recently that is.

Summer, of course, is when the pond is most popular. Songbirds drink the cool water and bathe in shallow pools. The green frogs station themselves at the pond’s perimeters waiting for insects. Blooming white lily blossoms enhance their chances.

The pond also attracts the grandkids when they visit. It’s one of the first places they explore. They particularly enjoy feeding the goldfish and hunting for the frogs.

Davis, the middle grandchild, is especially inquisitive. Last time here, he wanted to know where the frog nests were. Davis bent over visually surveying the pond, intently looking for the frogs.

It was during his investigation that we discovered something very unusual. The largest of the green frogs was resting atop something dark, wet and balled up. I recognized the clump as a dead bird.

As I approached the crime scene, the murder suspect made a quick getaway with one giant plop into the water and hid under the lily pad leaves. From what I could discern, the poor bird was a female House Finch.

I could hardly believe it. I knew that bullfrogs ate birds. But green frogs? I wondered if it wasn’t just a coincidence that the frog came to rest upon the dead bird.

Still, the lifeless bird showed every indication that a frog had tried to swallow it. I distracted the grandkids by playing ball. When I went back later to retrieve the victim, it was gone.

A few days later, while cleaning the pond and feeding the fish, I discovered yet another dead bird. Curious, I contacted Julie Zickefoose, a noted author, artist, and lover of all things nature. She had never heard of a green frog snatching birds either. Julie suggested that I had a troublemaker in my peaceful pond, and that the perpetrator be removed to a farm pond if for no other reason than the safety and welfare of the birds that come to enjoy our pond’s refreshing water.

As long as those frogs had been there, I really hated to pin the fowl play on one of the green gang. I decided I needed conclusive rather than circumstantial evidence before I removed the big guy.

I decided to be vigilant, and watch and wait to see if the frog really did go after birds. On sunny days, it usually claims an easily visible grassy pad at water’s edge waiting for a free lunch.

Either the frog has had a change of heart, or perhaps diet, or I’m not a very good detective. So far, I haven’t found anymore carcasses.

I’ll keep watching, and if I catch the frog green-handed, I’ll let you know. In the meantime, let’s hope peace and tranquility reign in our little pond of paradise.

Best of the Midwest - Hiking, nature and photography

"Shootin' from the Hip Photography Tips"