September 11, 2001, dawned beautifully. The morning air was cool, as September mornings in Ohio tend to be. A light ground fog scattered the rising sun’s rays, delicately bathing everything they touched.

The morning’s beauty entranced me so that I lollygagged my way into the retirement community where I worked. There was no way to know then what the world was in store for on this glorious morning.

Before the clock struck 9, the day grew dark despite the bright sunshine and the clear blue sky. The day’s rapidly unfolding sequence of events changed the world. We know the sordid details and the global consequences all too well.

The events of that infamous day significantly impacted and altered our lives universally and personally. Our son Nathan worked near Times Square in New York City, nearly five miles from the World Trade Center. Would there be more attacks?

Before sitting down in my office that day, I had a phone call that tied me up for several minutes. Before that conversation ended, my second phone line blinked an incoming call.

However, that call went to voicemail before I could answer. It was Nathan. He wanted to know what was going on in the city. All the local TV and radio stations were off the air for some reason.

I immediately tried calling him back without success. I switched on the radio just after a commercial jetliner had crashed into the Pentagon. When I learned that a plane had hit one of the Twin Towers, I knew the worst was happening.

I rushed to the nearest TV and saw the devastation of both the towers. All was chaos. I tried calling Nathan repeatedly. All I got was a busy signal.

Soon came the report of a plane crash at Shanksville, Pennsylvania. No one knew if the attacks were over. The fear for our son and our nation intensified.

Then a miracle happened. Nathan had somehow managed to get a call through to me. Even 20 years later, I remember much of what we said in those few precious minutes.

Most of New York City’s communication antennas had been atop the Twin Towers. So, I quickly gave him the details of what I knew. Nathan said no one could leave Manhattan. The rest of the conversation focused on making an emergency plan if he had to stay overnight in his office.

I rushed up the hill to the elementary school where my wife taught and filled her in on what I knew. Other family members and friends kept calling the office to see if our son was all right.

The day dragged on with no further word from our son. Unknowingly, Nathan was on the first train out of the city, slowly making his way back to his Brooklyn apartment about the time my wife and I returned home.

What typically was a 20-minute ride to his subway stop took two-and-a-half hours. We were glad to know he was safe. Too many others couldn’t make that statement.

The trauma of this day forever etched these memories into our souls, and probably yours, too. The anniversary of this globally tragic event always revives them.

A wise counselor told us to keep on loving and communicating with those nearest and dearest to us affected by the day’s events. We have humbly tried our best to comply and have also redoubled our energies outward to those most in need by helping and giving wherever we can.

Keep on loving and communicating. Isn’t that good advice for all of us every day we walk this sacred earth?

My memories from September 11, 2001 are bathed in an emotional kaleidoscope of lights that seemed to guide me through that infamous day.

The first light broke with the sunrise as I readied for work. I stood awestruck at the beauty that played out before me. The light from the morning sun glinted in bright shafts of beams through and around the leafy branches of the giant black oak tree directly across from our home. A misty ground fog was rising, reflecting and refracting light beams every which way.

The haze had dissipated and the sky turned pure sapphire by the time I reached my workplace. The sun had no competition now. The brightness of the crystal clear day buoyed me.

A lengthy phone call interrupted my regular startup office routine, which included turning on the radio. The caller went on and on, unnecessarily repeating point after point.

The second line on my phone rang. By the time I could rid myself of the windy caller, the other call had already gone into my voice mail.

Soon the little red light on the phone began to blink, the signal that I had a message. It was from our son, who lived and worked in New York City. Despite the passage of time, I can still distinctly hear his words.

“Dad,” Nathan’s message said, “Something has happened at the World Trade Center. We don’t have Internet or TV. Can you tell me what’s going on?”

I hung up and quickly turned on the radio. The first thing I heard was that a plane had crashed into the Pentagon in Washington, D.C. I bolted to the receptionist’s desk to find out what was happening. I was told that a plane had flown into one of the Twin Towers in New York City.

I tried to reach my son at his workplace, which was just south of Times Square. Neither his office phone nor cell phone would ring through. Fear gripped me.


I went to a TV to watch what was happening. By then, the second tower had been hit, and reports were coming in of another plane down in southwestern Pennsylvania.

“Dad,” he said trying to cover his anxiety, “I don’t know how I got a line out to you. I just wanted you to know that I’m OK but that Manhattan is locked down. No one is going in or out.”

Despite our mutual fears, an indescribable light of love connected my son and I through those phone wires. We spoke for about 10 minutes until Nathan said that others wanted to use his phone. By late afternoon we were calmed with the news that our son had safely returned to his apartment. 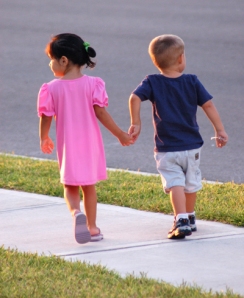 At the end of that incredibly long, exhausting day another light shown. The live TV coverage broadcast a surreal scene. The evening’s sun filtered through the gray, smoldering debris at Ground Zero. A ghostly spire, all that structurally remained of the Twin Towers, reflected and refracted light beams eerily similar to those at the oak that morning. I hoped that some good could come of this horrific international catastrophe.

Now a decade removed, I still cling to that desire, though too many lives have had their own individual lights snuffed out. I long for the light of peace among all peoples, even if it means the need to share that light one person at a time.