On the last morning of 2009, the entire year seemed to flash before me as my car spun out of control on the icy road. When the car crunched against the utility pole, I was jolted back into reality.

That minor mishap seemed a microcosm of my 2009. I thought of Dickens’ opening line in his classic “A Tale of Two Cities.” Indeed, “It was the worst of times, it was the best of times.” In many ways, I would like to forget 2009. Instead, I can’t stop remembering it.

Still, with everything that had happened, 2009 is all a whirl to me. Too many times life seemed to abruptly spin out of control last year, much like my car before it hit the pole.

I do know many more good things happened than bad. Our first granddaughter was born, and Maren is as precious as her name. My wife and I enjoyed spring training in Arizona. We cherished our times with friends at our beloved Lakeside, Ohio and continued to refurbish the little cottage that my folks built on Dad’s favorite fishing lake.

Even so, I still lost all sense of time, which is very uncharacteristic of me. I couldn’t remember if an event occurred the previous day or the previous week. That was a direct consequence of dealing with my father’s extended illness and subsequent death. Of course, I joined other family members in reassuring and tending to our mother, too.

Early in the year, Dad and I spent hours on the road and in doctors’ offices, an agonizing journey through the medical maze that led to the dreaded diagnosis that his cancer had returned.

Dad loved history, sports, family, archeology, hunting and fishing. But more than that, he loved sharing those experiences with others, and hearing their stories, too. Dad was a storyteller extraordinaire. As the designated driver on our trips, I was the beneficiary of tales involving many of those subjects.

Dad loved life and went at it like he did everything else, with reckless abandon. Even at his advanced age, he chose to fight back with radiation, and gave it a valiant effort. There was still so much to learn and share, he reasoned.

After he stopped his torturous treatments in early August, Dad seemed a changed man. He accepted his situation with as much dignity as he could muster, yet carried on hovering over Mom and conversing with whomever he could anytime he could. Though he never taught, Dad was the consummate teacher.

Dad set goals. He aimed to participate in the September 12 Honor Flight from Akron, Ohio to Washington, D.C. and back in one day, and he did. In all of his life’s experiences, Dad ranked that day right behind his 67-year marriage to Mom.

Next up was Thanksgiving, and Dad again defied the odds and joined the family assembled around the traditional meal one more time. He loved family gatherings, making those a priority in his life. Christmas was his next objective.

Sadly, Dad died four days before his favorite holiday. But my siblings and I agreed that that if there was an appropriate time for Dad to die, Christmas was it. From Dad’s enthusiastic viewpoint, everyday was Christmas Day.

On December 31, I scrambled out of my car uninjured. I was thankful that 2009 was ending, even if it did so with a crash. Given the events of 2009, I resolved to live everyday in 2010 with hope and thanksgiving. It’s what Dick Stambaugh would expect. 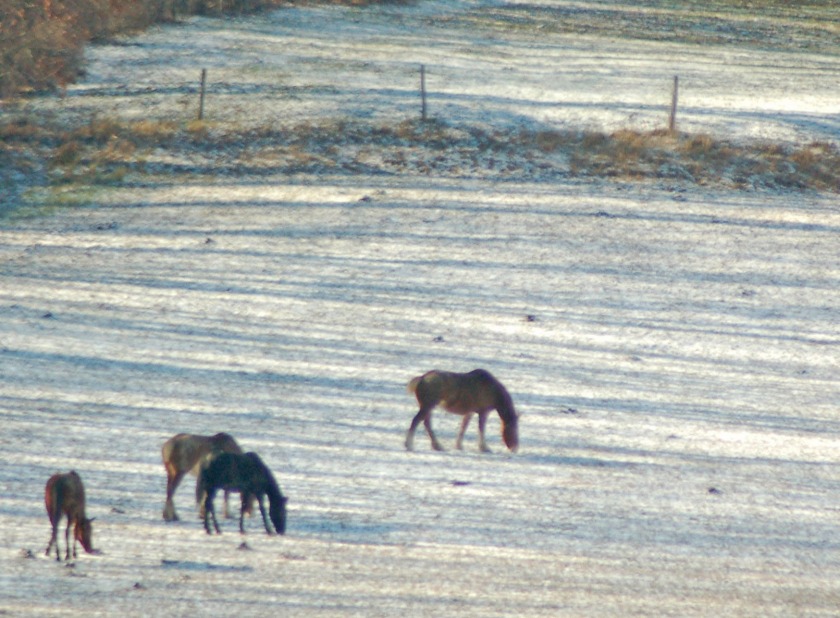 Hillside horses fixed in the fog,
All facing north,
Heads to the ground,
Nibbling at whatever
They can find
Through the new fallen snow.

An anniversary of sorts slipped by last month relatively unnoticed. I’m pretty sure Hallmark doesn’t have a card for this one. We have lived in this same modest, utilitarian home on County Road 201 for 30 years. I really didn’t think much about it until we went through our annual tussle with the Christmas tree just a few days after the homey benchmark. We always buy a live tree, which is fitting. The color for a 30th anniversary is green.

This year we selected a lovely Douglas fir raised on a windswept hill on a tree farm in the county south of us. Thanks to the sharp blade of the bow saw, we had our tree in no time. We strapped it to the top of the van for the 20-minute, picturesque ride home. Over the years, we have chosen a variety of evergreen species for our Christmas tree. White and Scotch pine, blue spruce and various firs have all graced our place with their beauty and piney scents.

The first few years, we used balled, live trees, and then planted them once the holidays had concluded. But with the yard deemed full, we went to cut trees. Most were already harvested, but some like this year we sawed ourselves. Both my wife and I grew up with the live Christmas tree tradition. Once married and in our own home, we continued that practice.

Along with that ritual, however, came another unintended and unwanted one. It seemed nearly every year there was some issue that transformed what should be a joyous occasion into a troublesome one. The kind of tree or who had cut it was insignificant. If I had kept a list, which I didn’t, there could quite possibly be 30 different problems in getting the tree set up right. More likely there would be 30 different versions of the same concern. Apparently, stubbornness is impartial to tree species.

Of course, it’s rather easy to blame the string of problems on the trees. They can’t talk back. It’s also hard for men to admit they might be the obstinate ones. Most of the predicaments could be found at the base of the trees. That’s where I tended to work at the annual tree resurrection. Throughout the years I noticed a definite theme to the debacles. Once we had the tree exactly where we wanted it, straight as an arrow, at some point before, during or after the decorating it would fall over.

One year, I think during December’s full moon, the tree toppled two weeks after being erected. I couldn’t blame the kids. They weren’t home. I couldn’t blame the wife. She was fixing supper. I couldn’t blame the dog. He was napping with me. In that particular case, we righted the tree, and in lieu of duct tape, we secured it with thin, clear fishing line. This year I didn’t have to resort to that. The tree fell over as soon as I told my wife it was all right to let it go. She did and it did. After several tries, I finally figured out the problem. The tree trunk was too skinny at the base, which didn’t allow for it to be properly supported by the holder’s four prongs.

Using my best male contemplative skills, I devised a simple but non-festive solution to our problem. I shimmed the tree, and my wife trimmed the tree. And yes, it is still standing. Had the tree not fallen, though, I may have forgotten all about the three-decade watershed of blissful living on County Road 201. Merry Christmas everyone, whether you have a tree or not.