Within hours of one another, I received three divergent yet emotional messages about grandchildren.

The first came after I had changed my profile picture on Facebook to a shot of my middle grandchild celebrating his fourth birthday. The picture showed Davis heartily laughing in front of his makeshift birthday cake.

The four candles signifying his age burned as bright as his smile. The candles were securely stuck in a row in the thick, chocolate frosting of a cream stick that Nana and I had bought at a local Amish bakery before leaving Ohio.

It was a fun time, with the family finally gathered for his birthday. It was the first one we had celebrated with Davis. Texas was just too hot and we always seemed to be extra-busy in the middle of July.

But now that Davis and his family had moved to Virginia, we made sure we were there with and for him. The message about all this was from his mother, my daughter, asking for the pictures from the party. I had yet to share them with her. She loved the shot and wanted to see the rest.

When I checked my Facebook page in the morning, I found a disturbing and extremely sad posting by the son of a friend of mine. His sister’s newborn daughter had died right after birth.

I shared the sad news with my wife. We are close friends with the expectant grandparents. This baby would have been their first grandchild, one they had so longed for and had happily anticipated.

Now all expectation of playful days ahead had been dashed. I couldn’t imagine how devastated they must feel. I felt guilty for having three healthy grandchildren.

Their daughter lived in Indiana and I knew they would be with her. What could I do to offer my deepest sympathies, to reach out to them in their time of need?

While I struggled with this dilemma, I received an email containing the weekly column of a friend and writing peer in Virginia. He had written about his vacation with his grandchildren and included a picture of him wading in the ocean, a towheaded granddaughter tugging on one arm, a brown-haired grandson on the other as the foamy surf broke upon them.

It was clear that both grandchildren hung on to their grandfather in trust and love as the soft, warm waves crashed against them. I was happy for him, sad for my other friends, and conflicted about being able to reconcile these seemingly disconnected incidents.

Grandparents are supposed to be wise and loving and adored. My friend’s picture clearly revealed those dynamics. But we also know that there are times when life simply isn’t fair and there is absolutely nothing we can do about it.

I hope and pray that my three grandchildren will grow and prosper and live lives of service to humanity. I am deeply distraught that my friends Bruce and Helen cannot now say the same thing for their granddaughter.

I am sure many of their friends will reach out to this fine couple in their grief. When I get the chance, though, I will pretend we are at the shore, standing knee-deep in the churning surf, readying for life’s perilous waves to come crashing against us, Helen clasping one arm, Bruce the other, trusting and loving.

At this mournful moment, that is all I can offer. 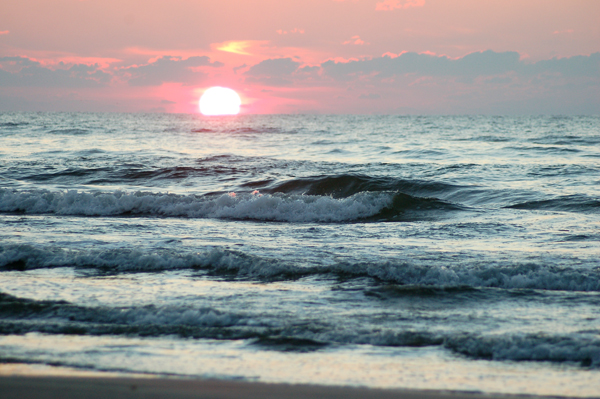