The official National Park Service website listed the Lower Hawksbill Trail as an easy walk. I would soon discover that “easy” was a relative term.

To be honest, I’m not sure what I thought the hike to the highest peak on the Skyline Drive would entail. I followed the preparation instructions as best I could. I packed bottles of water, snacks, camera and accompanying batteries, binoculars, wore hiking shoes and a hat. I thought I was all set.

Before reaching the trailhead, I had already stopped at nearly every turnout along the Skyline Drive after I entered Shenandoah National Park at the Swift Run Gap entrance. As usual, I took too many photos. 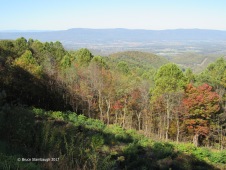 Color along the road. 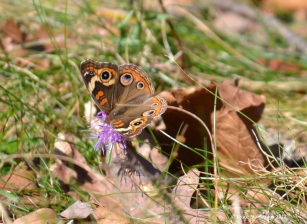 A flower among the leaves.

As I approached the trailhead’s parking area, I could see that I wouldn’t be hiking alone. Parking spaces on both sides of the roadway were at a premium. After all, it was a beautiful fall day for being outdoors.

I stuffed my supplies in the multiple pockets of my hiking vest and headed up the trail. The path’s incline seemed a bit steep for a trail identified as “easy.” I soldiered on, stopping every so often to catch my breath. Unfortunately, the way got steeper and steeper.

I met a few other hikers coming and going along the rocky trail that wound its way nearly two miles to the highest summit in Shenandoah National Park. Hawksbill peak logged in at 4,049 feet above sea level, a mere foothill for the Rocky Mountains. The trail climbed up and through a tinder-dry forest of mixed hardwoods and occasional evergreens. Finally, the trail flattened out, and the vegetation became more brushy and dense. I was near the top.

Once I saw the stone shelter, I knew I had made it. I scrambled the last 50 yards to the ragged Hawksbill summit and started snapping photos. A man with walking sticks teetered on the precipice while his friend took his picture.

I sat down near them to rest and admire the view. Instantly, the three of us began conversing. The beauty of wilderness tends to meld human hearts. I learned that the man with the walking sticks was named Jim. He had taken on this hike as a mental and physical challenge. In late March, Jim had been hit from behind by a vehicle as he walked along the highway near his home in eastern Pennsylvania. Jim was hurdled through the air like a struck deer and landed on the payment unconscious and severely injured. Both of his arms and legs had compound fractures, and Jim’s abdomen was split open.

First responders didn’t expect Jim to live. A month in the hospital and several operations later followed by another month in rehab, Jim beat the odds. He had had lots of time to think. Jim fondly recalled the year he graduated high school when he had walked the entire 2,184-mile length of the Appalachian Trail from Georgia to Maine.

He decided that climbing to Hawksbill’s summit would be the perfect way to help heal emotionally from his recent traumatic accident. So with plates and screws in his arms and legs, Jim did just that with only the aid of two walking sticks and his friend Josh. Jim’s broad smile alone evidenced his courage, humility, and accomplishment as he posed for a photo.

It was then that I realized that despite all my huffing and puffing up the mountain, I really had taken the easy trail.

6 thoughts on “In hiking, easy is a relative term”