Greg Miller is a nice guy. Anyone who even remotely knows Greg would easily agree with that statement.


Though raised just a mile south of where my wife and I have lived for 32 years near Berlin, Ohio, I really never got to know him until recently. Greg had long grown up and started his own adult life before we moved here. His mother continues to live in the same house, and still meticulously adorns her property annually with a wide assortment of lovely flowers.

Others have known Greg much longer and better than I have. But just from the few conversations that I have had with him, I can attest that Greg is the kind of guy everyone would welcome as a friend.

I had heard of Greg well before I got to know him. He was one of three birders about whom Mark Obmascik wrote his 2004 book “The Big Year.” When Hollywood turned the book into a big screen movie of the same name, Greg was ecstatic, and rightly so. Not everyone has a book written or a movie made about a life accomplishment.

By his own description, Greg is a computer programming geek by trade and an avid and expert birder by desire. Greg transformed that hobby into nearly an obsession when he spent much of 1998 doing a Big Year. A Big Year is when a birder observes or hears as many North American bird species as possible. 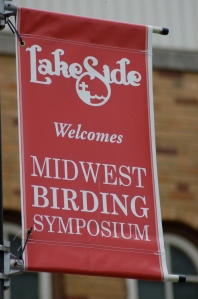 That year Greg surpassed the coveted 700 mark, as did two other men. The story of the extreme efforts of those three birders inspired both the book and the recently released movie.

Greg gave a touching keynote address at the Midwest Birding Symposium in Lakeside, Ohio in mid-September. He spoke to an audience of nearly 1,000 for an hour using no notes, speaking directly from his heart. Greg had the crowd spellbound relating his personal, touching story.

I was greatly moved when early in his talk Greg cited the influence of his kind parents, especially his father, in generating his interest in birding. Greg said he couldn’t remember seeing his first bird or getting his first pair of binoculars. Birding was simply a part of his heritage, thanks to the quiet, patient guidance of his late father, who himself was a man of integrity.


Greg told the crowd how his father taught him to see the bird, and then lift his binoculars to his eyes to observe the bird’s details and to verify the species. Years later, Greg showed movie star Jack Black, who played Greg in the movie, the same birding technique.

Greg served as the birding consultant for the movie. He spent three weeks on-site with the crew. Greg couldn’t get over that the cast and crew were as enamored with him as he was in awe of them.

Greg is not perfect. He would be the first to tell you that. Greg has encountered and endured some of life’s pitfalls, like the rest of us humans. Now, however, he is basking in the glow of notoriety, racing to speaking engagements all across the country as if he were chasing after the rarest of birds.

Good for him. Through it all, Greg has remained Greg. He has not lost the sense of whom he is nor how he got to be where he is. That alone speaks volumes of just how nice a guy Greg Miller really is.

2 thoughts on “Greg Miller is a nice guy”