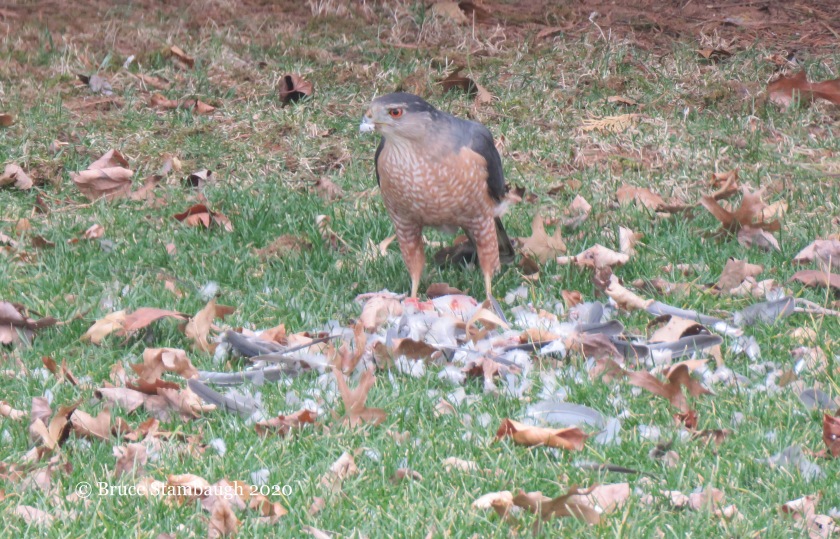 “There’s a hawk in the backyard,” my wife hollered from the other end of the house. I rushed to where she was. The bird was on the ground near the line of evergreens that divide our yard from a neighbor’s.

It was the neighborhood Cooper’s hawk. I had seen it before swooping low over homes in search of its favorite target, songbirds that frequented backyard feeders. I had briefly seen it in our backyard before.

The hawk’s blood-red eyes shown even from that distance without my binoculars. It was too big for another similar accipiter, the stealth sharp-shinned hawk. This beautiful Cooper’s had made a kill and was ripping it apart with its sharp, hooked bill.

I hurried to retrieve both my binoculars and my camera to watch the unfolding drama. I need not have rushed. The hawk remained in the same spot undisturbed, devouring its catch for nearly an hour. 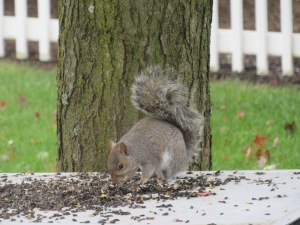 At first, I thought the Cooper’s had captured one of the many grey squirrels that frequent our yard in search of food or to drink from the birdbaths placed around the exterior of the house. As soon as I lifted the binoculars to my eyes, I knew it wasn’t a squirrel.

I could see feathers scattered on the ground around the hawk. It had captured one of the mourning doves that come to the feeders or roost in our trees.

I wasn’t sad, nor did I think the scene gruesome. Neva and I had witnessed the balance of nature in progress, “survival of the fittest,” as some refer to it. Just as the dove needed food, water, and shelter, so did the hawk. In this case, the dove was at the wrong end of the food chain.

Empath that I am, I felt a little sorry for the poor mourning dove, but not that sorry. After all, the Cooper’s hawk needed to eat, too. That’s the way of nature.

I try to not get too attached to birds and other wildlife that I encounter. Instead, I just try to enjoy them and their various antics. Each one seems to have a personality all its own, behaviors that set it apart from others of the same species. The riotous European starlings might be the exception to that observation.

I marvel at how nature unfolds, sometimes at her own expense. Once, while watching sandhill cranes walk toward me in Florida, I heard a commotion behind me. A bald eagle had snatched an American coot from a channel. The eagle landed in a large tree where black feathers flew as the eagle ripped apart its breakfast.

It’s important to remember the big picture when it comes to nature. Where would we be if birds didn’t eat insects or weed seeds or other animals? That alone is reason enough for humans to take better care of planet earth.

I watched the Cooper’s hawk off and on for the duration of its dining. It ate judiciously, pausing every now to check its surroundings. It would return to its meal, pulling sinew, flesh, and bones from the carnage.

After it flew off, I went out to inspect the crime scene. All that remained of the mourning dove were two circles of feathers. One fanned out where the dove was snagged, and the other only inches away from where the hawk dined. The hawk had eaten every other part of its victim.

That is the way nature works. It is a joy and an honor to admire her at each opportunity that she affords.

5 thoughts on “The best time to enjoy nature is now”