Life is a mystery.

I hiked the short trail with one thing in mind. I wanted to find the old cabin and take a photo of its chimney if it indeed had one. As so often happens in life, discovering what I was looking became secondary in this trek.

I took my time on the trail, soaking in all the glorious sights and sounds that I encountered along the way. There was a lot to absorb.

Rock Spring Cabin was a short distance away from a crude hut built for hikers along the Appalachian Trail in Virginia’s Shenandoah National Park. From the cabin’s covered front porch, the Page Valley played out in the patchwork patterns of fields far below.

The primitive log cabin did indeed have a stone chimney. I snapped my picture and headed for the spring of Rock Spring Cabin nearby.

When I arrived, I was stunned at what I saw. I stood there in both amazement and disbelief. There, high in the Blue Ridge Mountains, cold, clean, crystal clear water gurgled from beneath giant boulders as old as time. Human interaction, of course, had to plumb it with a PVC pipe.

Instantly, my mind flashed back to my childhood. I thought of the Old Testament Bible story of Moses striking a rock and water gushing forth for the assembly of disgruntled, thirsty Jews wandering in the desert. That ancient story always struck me as a blend of awe, mystery, and miracle.

I contemplated the moment. I couldn’t help but wonder why here at this spot, more than 3,000 feet above sea level did water run from rocks? The earth does fantastic, mysterious things. Explanations are not always required.

Still, I reckoned the answer to my rhetorical question. Clearly, the rock strata folded long before human history began and forged a channel for the water table below.

Water from a rock. 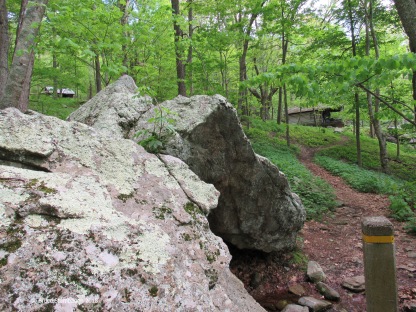 Yet, there was something mystical about the rock spring, its waters trickling down the steep slope far into the valley below. I mentally traced its path from small stream to a creek that formed a tributary to the Shenandoah River. Farther north, it met the broad Potomac River at Harper’s Ferry, West Virginia, and then flowed east through rapids and placid waters alike, passing the nation’s hectic capital into the Chesapeake Bay and on into the Atlantic Ocean.

Noisy ravens awakened me from my lively daydreaming. Apparently, they viewed me as an intruder. Not wanting that title, I returned to the main trail, warblers, and thrushes flitting and singing in the leafy canopy high overhead.

I walked a short distance down the trail, and the raven followed me, swooped low, and continued its nasal banter. It was only then that I realized that I was not the target of its raucous concern.

A motion drew my eyes downward. Not 30 feet away a young black bear grazed along the forest floor. My head instinctively swiveled in search of the mother bear. I saw only trees, plants, and rocks.

I gingerly stepped a few feet down the trail where I could get a better view of the cub, likely in its second season given its size. One click of the camera shutter and the bear spied me and bounded down the hill towards the spring. Overflowing with wonder and joy, I headed in the opposite direction for the parking lot.

I went searching for a cabin and found so much more. An emerald forest. Water from a rock. Agitated ravens. A frightened bear cub.

Life is a mystery waiting to be solved.

15 thoughts on “Inspired by water from a rock”